DNA Lounge is not only the adopted birthplace of crashfaster, but the premiere San Francisco venue for the growing chip scene, and has worked with 8bitSF for over four years.

Supported by the phenomenal acts Bit Shifter (NYC), Trash80 (LA), Unwoman (who is featured on Further), DJ Doctor Popular and visuals by Noukon this show will be an absolutely massive celebration, and everyone in attendance will receive a free download of the album! 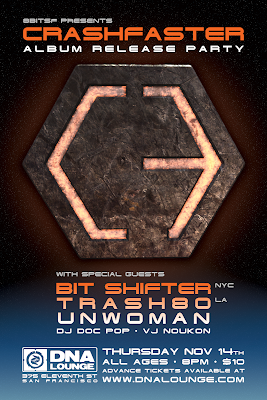