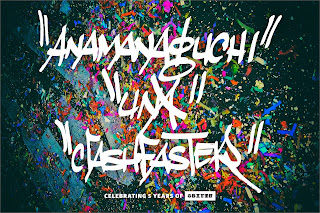 We're celebrating 5 years of 8bitSF with the triumphant return of ANAMANAGUCHI at DNA Loung. The 'guch headlined our very first show 5 years ago, and we can't wait to party with them again! GET YOUR TICKETS NOW, before it's too late!

In 2013, Anamanaguchi released their first live action music video featuring a new single Meow. During a hugely successful Kickstarter Campaign with the promise of making it “more than just an album”, the band released ‘Endless Fantasy’, a 22-track full-length album under their own record label, ‘dream.hax’. Setting the stage for a new era in Guch history, the band reaches the far ends of the galaxy with its sound and has no sign of slowing down here on spaceship earth!

Una who used to be a charismatic shop assistant in Harajuku street scene, started her modeling career as an Aomoji-kei (Harajuku) model by getting a snapshot taken by a fashion magazine in 2010. It didn't take her long to appear on fashion magazines regularly. With her beautiful look, edgy fashion style and perfectly balanced body proportion, she became a new type of Aomoji-kei (Harajuku) model who is capable of expressing not only kawaii but also cool aspects of Harajuku. This time, this iconic figure in Harajuku street scene will be debuting with her first single "Juicy Juicy" on 14th August 2013. Her new single has been recognized widely, being used in a tv commercial. Una, a representative for this new street-born kawaii culture is sure to attract a great deal of public attention!

San Francisco's chiptune staple crashfaster has evolved from a gameboy-weilding solo act into a snarling, four-bodied electro-rock monster. Isolation, assimilation, accomplishment and emptiness fill the the band's songs, which genre-hop from electro to industrial, electronica to rock, all wrapped in a space punk aesthetic.