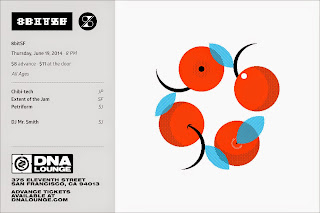 Extent Of The Jam (SF)

Chibi-Tech, also known as Jaelyn Nisperos, has been making chipmusic since 2006, and has had a long-running, successful career as a chiptune artist. Chibi-Tech is known for her high-energy live shows all around the world; she’s played gigs at Blip Festival Tokyo and 8static Festival in Philadelphia. Her foot-stomping chiptune tracks are the stuff of legend.

Extent Of The Jam also known as Louis Gorenfeld is an artist from San Francisco, CA specializing in hyperactive videogamic funk grooves and original sound design. He has been tracking jams since 1992, and continues the tradition to this day. Most recently, he was featured on the Chiptunes=#SrsBsns.

Petriform is an electronic musician from the San Jose, California area specializing in chiptune, drum and bass, and mashups/breakcore. His work has been recognized by outlets such as independent internet radio network Radio Reddit, where his track "I-5 Night" is listed in the top three of the all-time most popular tracks chart and is featured on their Best of 2012 compilation release. His sound design work can also be heard in the default theme of freeware PC dance game StepMania, version 5.