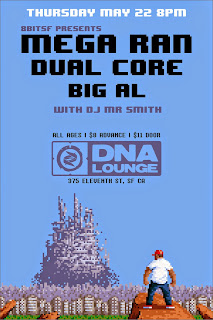 int eighty and c64 are... Dual Core. Brought together by the power of the internet (and perhaps a touch of musical providence), Cincinnati-based computer programmer int eighty and Manchester-area graphic designer c64 have been rocking the more studious side of the hip-hop underground since 2007. With sharp production and cleverly calculated flows, Dual Core are a fitting soundtrack to the 21st century. In a world where the underground cultures of hip-hop and computer tech have leapt stylistic and scholarly boundaries to become the accepted parlance, their amalgamation is nothing short of expected. Yet somehow, Dual Core is scarcely what one would call predictable.

Big Al is a boss-like hip-hop/funk/dance artist with much love for old-school rap, 80s-90s tv & movies, classic gaming (NES/Sega/SNES/N64), nerds, geeks, & chip tune music. He is currently mixing his new album with the help of the one and only DJ Cutman. Come watch the fun unfold as Big Al goes balls-deep into the world of video game music and nerdcore hip hop.